Anna Maria Island is a quaint Barrier Island nestled in the Gulf of Mexico. Beautiful turquoise waters and white sandy beaches are the main attraction here. It is a place where “old” Florida charm can still be found, flip flops are a way of life and the speed limit never exceeds 35mph. High rise condos and fast food restaurants are pleasantly absent from our pristine “get away from it all” island. Our accommodations and restaurants offer something for everyone. From quaint cottages by the sea to deluxe suites, from million-dollar villas to rustic cottages to own, One visit to Anna Maria Island and you will be calling it, “My island in the sun”.

The island was originally used for hunting and fishing by various Indian tribes and the only way on and off the island was by boat. Visit the Anna Maria Island Historical Society for a look at this island paradise in its original form when it was discovered by the local Timucan and Caloosan American Indian tribes and then by Spanish explorers (including Hernando DeSoto) in the name of the Spanish Crown. In 1892 George Emerson Bean became the first permanent resident on the Island, followed by John Roser. Bean settled on the northern tip of the island, now known as Bean Point. It was Bean, his son Will along with Charles Roser who developed the area by adding streets, a water system and homes. Shortly after came a school and churches which lead to the beginning of an island community. A jail was built in 1927 for the drunk and disorderly visitors which is still standing today on Pine Avenue without a roof due to a fire in the 1940’s. Mr. Bean homesteaded much of what is now the City of Anna Maria. In the early 1900s, Bean began to develop the Island with the Anna Maria Beach Company, which laid out streets, built sidewalks and houses and installed a water system.

During this time, John Roser built the first house of worship, Roser Memorial Community Church, in memory of his mother. Roser was the creator of the Fig Newton, which he eventually sold to Nabisco Brands. Roser Memorial Community Church still stands and attends to the spiritual needs of Islanders. Typical of the early buildings is the present Island Playhouse, which was built on the mainland. It was transported to the Island by barge and has served the community during its long life as church, school, social and city hall.
The Magnolia Avenue School was built in the early 1900s and has since been replaced with the Anna Maria Island Elementary School, which is located in the City of Holmes Beach. The present school draws students from north Longboat Key as well as Anna Maria Island; it has a student body of just under of 400.

Anna Maria first appeared as a barrier island on unofficial US maps in 1848. In 1911 the Anna Maria City Pier was built. In May of 2011 this bridge will be celebrating its 100 Year Anniversary with a big “City Pier Centennial” festival. In 1921 the first wooden bridge was built connecting the island to the mainland in the fishing village of Cortez. The Bradenton Beach fishing pier is the western end of that original bridge. Throughout the developmental period of the Island, local city governments have worked diligently to preserve the heritage of This “Island In The Sun”, Anna Maria Island.

The island has ideal year round temperatures. Average Air and Water Highs/Lows by month/season are:

The average annual rainfall is 55.7 in with heavy months of 7-9 inches in June, July, August & September 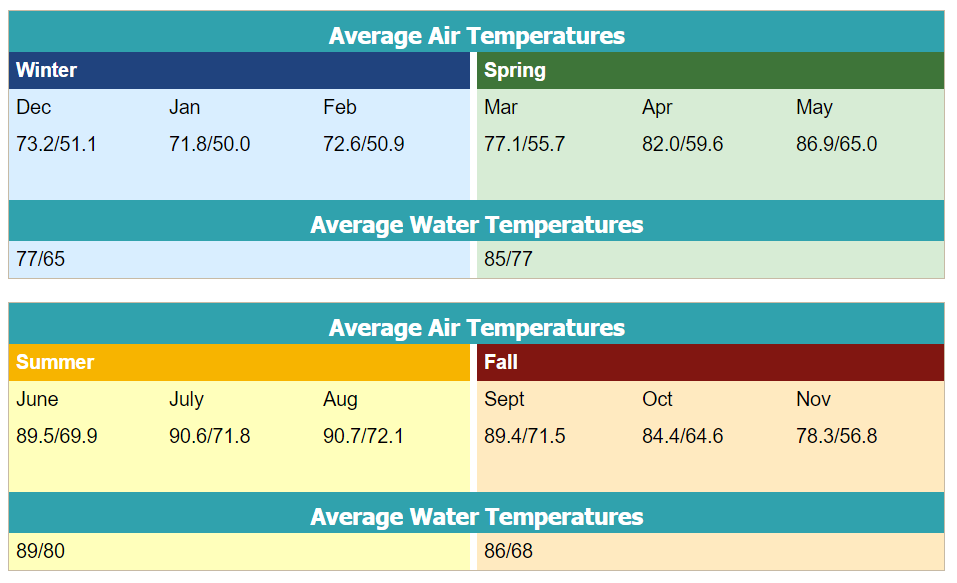 Follow the light and let us guide you to a vacation you will never forget - A beacon of outstanding design, Anna Maria Island's newest landmark, The Lighthouse, is located at 6807 P...